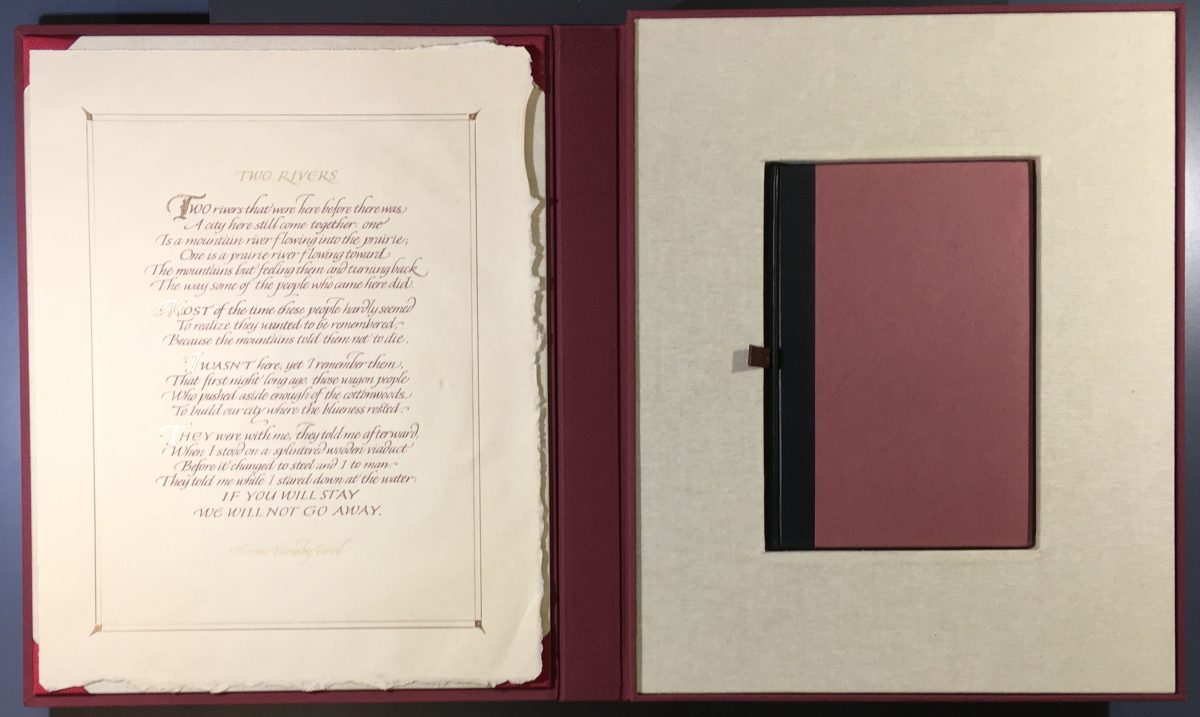 As a prominent artist and well known calligrapher in Denver, David Ashley has produced many works for notable figures and organizations over the years, including ten Nobel Peace Prize laureates for Regis University, the Colorado Alliance of Research Libraries, and the Colorado Calligraphers’ Guild, as well as many artists, photographers, and musicians.

David approaches every project with enthusiasm, passion, and joy. However, over the years, there have been some projects that were particularly unique and exciting endeavors and have remained memorable even with the passage of time.

“Two Rivers,” a calligraphic work produced for Pope John Paul II is one of such projects. The project was exciting not only because of the eminence of nobility of its receiver, but also because it held a quality that invokes fervor in the heart of every artist – it was a challenge.

A Present for the Pope: How It All Began

August is normally a slow month for David Ashley’s calligraphy business in Denver. However, the August of the year 1993 was different. On August 3rd, David received a phone call from a friend who informed him that the office of the Mayor of Denver was looking for a professional calligrapher who could create a gift for Pope John Paul II who was soon due in town for the World Youth Day Conference.

David had been planning to leave town to avoid the traffic and chaos that would surely erupt across all of the Mile High City upon the Pope’s arrival, but this turn of events immediately changed his mind. He contacted a member of the Mayor’s staff named Fabby Hilliard, whose number he had been given by his friend. After meeting Ms. Hilliard and discussing the project in detail, David was given the job and had approval to begin work immediately. Time was of the essence; the item needed to be completed by August 11th for a press conference before the ceremony, so David had only five days to finish the work.

David worked with urgency and precision to create a gift that would be perfect for the Pope. The Mayor’s office had decided upon an idea for the gift. They wanted to present the Pope with a first edition book of poems written by Colorado’s poet laureate, Thomas Hornsby Ferril. The book would be enclosed in folder and accompanied with a handwritten copy of one of the poems within the volume, “Two Rivers” which evokes the founding of Denver and Colorado. After working with Fabby Hilliard to select materials and paper for the book, David began work in his studio immediately.

First, David ordered all of the necessary materials, including a special cloth from Permalin Products in New York. Next, he turned his attention to the calligraphy. A handmade paper produced by a local paper maker named Ray Tomasso was used for the poem, which was written in Italic script. Next, David created the slipcase for the book and folder which would hold both items. A photograph of Confluence Park was taken and used for the cover of the folder and City seals were inlaid into the spines of the folder and slipcase. 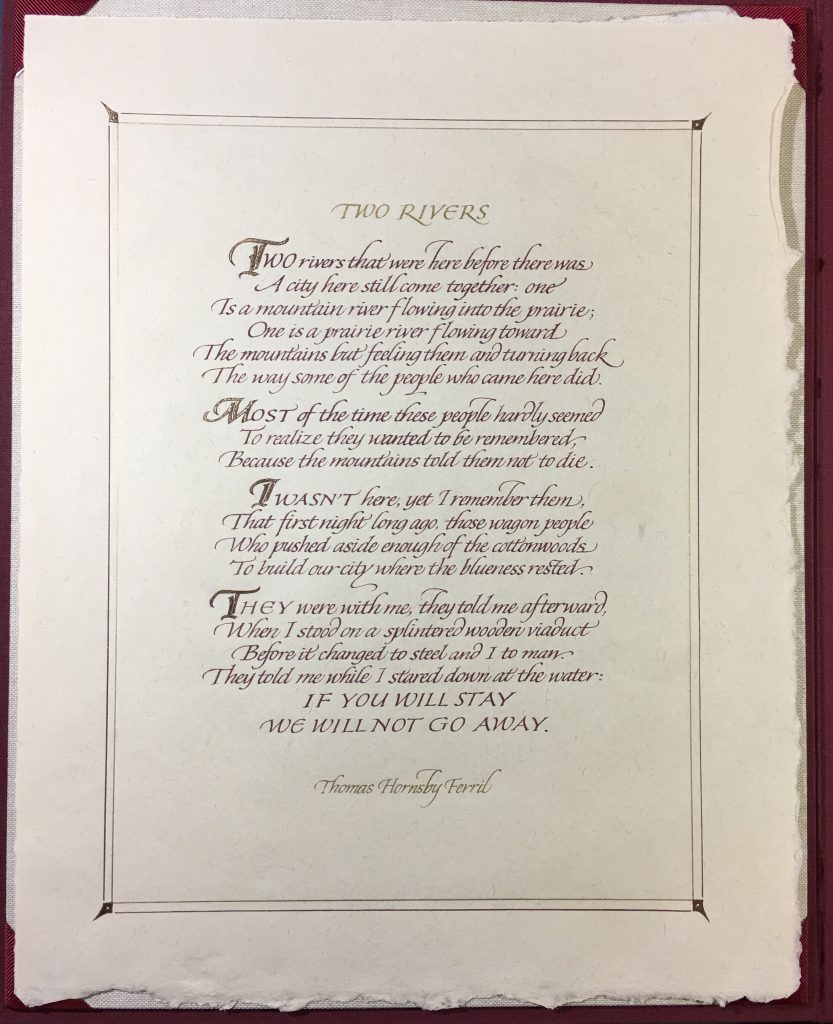 On Tuesday, August 10th, David placed the final touches on the folder. And in the evening, a celebration was held at his studio, which consisted of a small gathering of friends and fellow scribes. The next morning, David added a colophon card below the poem giving credit to himself and the artists who helped him produce the work. Photographs were taken of the final product before everyone headed to the news conference at City Hall.

On Thursday, August 11th, “Two Rivers” was presented to Pope John Paul II by the Mayor and Wilma Webb along with the Key to the City. The Pope acknowledged his gift and quietly passed the items on to a waiting table. Later, David was informed by a reliable source that the Pope opened the folder and read the poem aloud in the rectory, and announced that he would add the piece to the Vatican Library.

Today, “Two Cities” continues to reside on a shelf in the Vatican Library. David considers this an honor and privilege beyond compare. David is proud of his work given the time and parameters in which was completed.

To learn more about David Ashley’s work and calligraphic pieces, you can contact the studio directly by phone or email. David would be more than happy to discuss any ideas you have in mind or answer any questions you have about bookbinding, letterpress, or calligraphy.